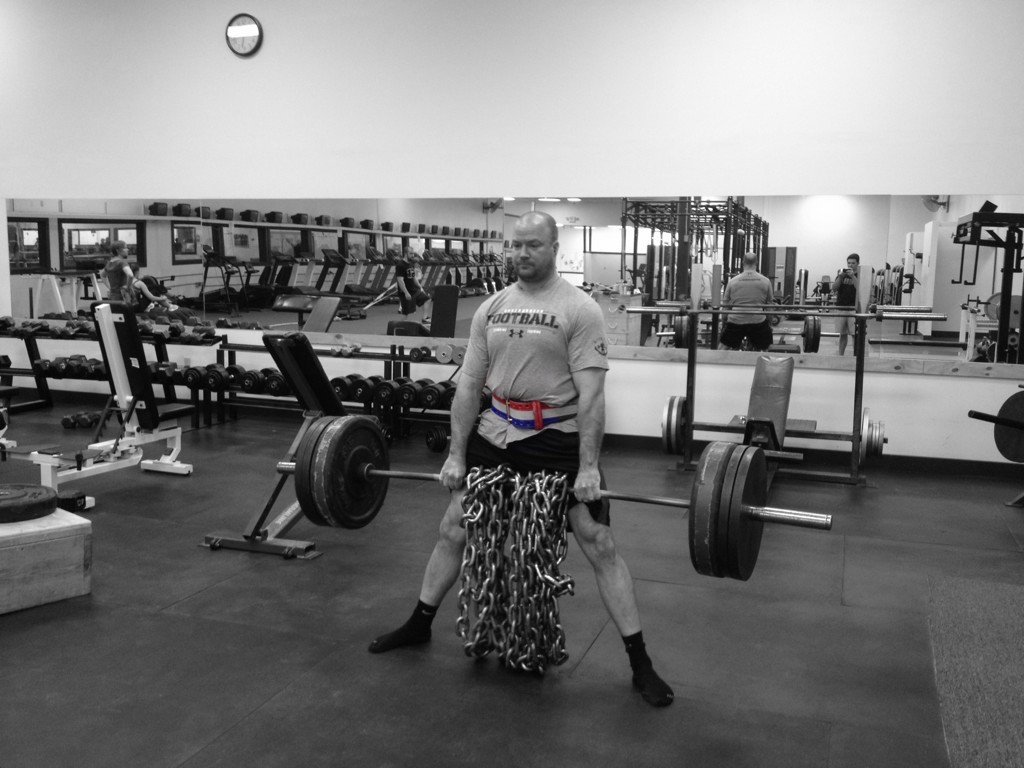 I saw the opportunity to capture some deadlift correction video the other day for everyone.  As you will see with the deadlift, like all other strength training, the setup is really key to everything.

When learning how to deadlift, most lifters get off track right at the start.

And if you setup with bad posture and without proper tension, you’re doomed before you even pull the weight. Matt, one of the guys I train with, has been working on his deadlift form for a while.  This means he is finding what works for his body type (torso length, femur length, i.e., anthropometry) and the reason we’ve taken him back-to-the-basics and started over.

He is tweaking and working on his:

– his upper back mobility limitations

– creating tension from the start

I’ve always been teaching him one of my favorite deadlift cues which works big time for novice lifters.  I talked about it in this previous post:

“Don’t pull…..push.  One of the deadlift cues I’ve been using lately that I really like is to not pull on the deadlift, but rather push.  Let me explain.  Once you get setup on the bar and create the tension needed, instead of thinking about pulling the weight with your arms, lock your torso in place and drive the ground away.  Too often when the cue is to “pull”, if the athlete loses stability, the back immediately rounds.  If I tell them to lock their torso into place and drive the ground away as if they’re doing a leg press, the torso angle remains constant and their hips don’t have a tendency to shoot up.” – Jim Smith

In the first part of the video, you’ll see I’ve asked Matt to go and hit a few reps on the deadlift.  I did not instruct him, I just let him pull the way he has been pulling.

1.  Ask the lifter to perform the exercise the way they do it (without instruction)

2.  Show them the proper way

3.  Have them show you the proper way

If they still cannot get it, video tape the set and play it back for them.  This will help them see it for themselves.  Sometimes, even with proper instruction, they can’t get it unless they actually see what they’re doing wrong.  So a flip cam or phone camera is very handy to have at all times.

Also, take the weight off – but not everything.  When reteaching or retraining the athlete, the weight shouldn’t be near max or even close.  You’ll need some weight on there because unloaded technique is way different then using a “light load.”  Especially for those lifters who have been training for a while.  It is OK to work with the bar or a dowel with novice or teenage lifters when doing technique work, but older lifters won’t be able to “feel” the movement with an unloaded bar.

Watch the video below and notice the following:

1.  The first set is uninstructed and Matt performs the deadlift like he has been doing.

2.  I video him doing “his” technique and show it to him. Before that point, he didn’t realize he was setup poorly.

3.  I show him the proper way to setup, breath and brace to create tension – and ask him to repeat it.

5. Matt performs the second set with all of the technique cues in place – and it is much better.

For more information:  How to Deadlift

7 Ways to Crush Your Workout – Part 1